The Beginning of a Great Love Affair

It has been over 58 years since my father started collecting antique cars and we still enjoy the hobby just as much today. This great passion for cars began in the early sixties when Dad purchased a 1937 American Bantam from a car collector in Atlanta, Georgia for $800. It was a dream of his from the time he was nine years old. Bantams were built in Butler, PA until 1941 just before World War II. They went into design for the very first jeeps, but lost their contract to Willys and Ford. The reason was they were to small and could not be built fast enough for the war efforts. This tiny American Bantam still remains in our car collection today.

The second classic car my father purchased was the very rare 1940 Packard Darrin which is #11 of 30 Darrins built by Howard Dutch Darrin at his Hollywood Blvd shop. This Darrin was originally built for actor Chester Morris who starred in a TV series "Boston Blackie" in Hollywood, California. It happened on a beautiful spring day in 1965 when my dad and his buddy went to go see a 1932 Auburn V-12 roadster. It wound up not being exactly what my father was looking for that day. His friend remembered a Duesenburg collector nearby in South Bend, Indiana. So they drove out to his mansion to see if he knew of any classic cars for sale in the area. The collector, Mr. Fitterling said he did and gave Dad the man's name and number. They headed downtown for lunch and to call the man with the cars for sale. The seller was Mr. Sy Morris who owned a big scrap steel company in town. He said he had two cars for sale, which he had inherited from his brother who passed away in Detroit, Michigan. After speaking with Mr. Morris, he said the cars were just underneath them in the building's parking garage. An hour later, Mr. Morris pulls up in a new Cadillac Limo, and we drive around back and waited while he turned on the lights. Way in the back corner under two covers were a 1929 Ford Station Wagon, and a yellow 1940 Packard Darrin with red wheels. Dad asked "how much for the Packard?" Mr. Morris said, "$3,500." Dad said, "how about $3,000 and a brand new TV from my store." It was a really quick deal. Mr. Morris picked Dad up in his private jet the following week in Muncie, and he drove the Packard back home from South Bend.

It was 1967 when Dad saw an ad for a restored 1934 Packard 1101 Convertible offered for $5000 in Hemmings Motor News. He called the owner, Mr. Lee of Jackson, Tennessee and told him he was very interested in buying the car. Mr. Lee said he would hold the car for 3 days if Dad could make it down to Tennessee. So he gassed up his 1960 Pontiac Bonneville, grabbed some cash and hit the road. Dad's good friend John Smith rode along and they arrived that Saturday excitedly awaiting to see the Packard. It was beautiful with soft brown exterior, black top and orange-red interior. You guessed it, Dad bought himself another Packard not knowing how he was going to get it home. After talking cars all day and the fact it was getting late, Mr. Lee invited them to stay the night. WOW! What southern hospitality! The next morning they hooked up a tow bar to the two cars with John driving the Pontiac and Dad in the Packard, and they headed home to Indiana. The Packard's restorations were finished with the help of Mr. McCrea. These first three antique cars have been a big part of our family for over 58 years now and hold many wonderful memories.

Since my father and I have been so fortunate in being able to collect a vast variety of classic cars, we decided it would be exciting to share our collection with those who appreciate them as much as we do. In 2003, Cole's Classic Cars officially began. We have had the chance to meet so many wonderful people and work with a lot of great clients through the years. On behalf of Cole's Classic Cars, we would like to personally thank everyone who has made this possible. We look forward to serving you during your next special event. Happy motoring. 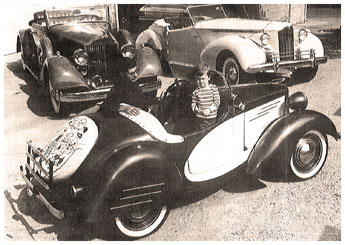 Larry & Darrel in July 1967 Muncie, Indiana with the Bantam and two Packards 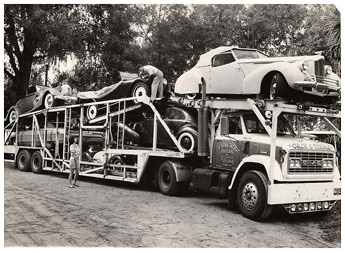 Moving the family and car collection to Orlando, Florida in August of 1971 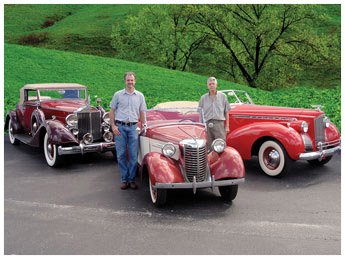 Larry & Darrel in September 2008 with the first three collector cars from 58 years ago.

For more information please contact
Darrel Cole at 407-963-9089
or send us an e-mail at Darrel@ColesClassicCars.com.

Thank you for your time and consideration.